The Mystery in Romance

Can a teenaged girl find happiness solving crimes and driving older men crazy?  Find the answer to this and other thought provoking questions in The War This Side of Heaven, a trilogy and continuing series by Sharon Evans.

In a romance novel, there must be trouble in paradise.  With conflict being a necessity, tension is heightened and romance becomes even more exciting when crime and mystery play a part.
From earliest childhood, I have loved the Mystery genre, reading books that I wasn’t old enough to check out from the library, eyes glued to the TV watching Charlie Chan, Perry Mason and many of the other detective thrillers.  But as I grew older and developed many crushes and began being heartbroken on a regular basis, I added to my reading interests Gothic romance novels, beginning with Charlotte Brontë’s Jane Eyre.   Then, when I began writing my own romance novel, it was only fitting that murder and suspense play a major part. 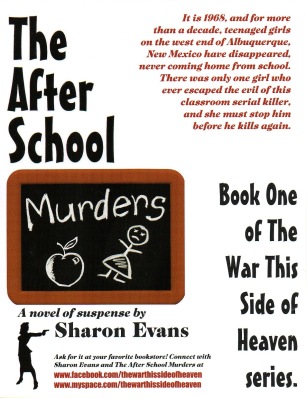 In The War This Side of Heaven, I first patterned my heroine after myself.  She is what I might have been, ‘If I knew then what I know now.’  This way I could create a world in which I could have all manner of adventures that would never come my way.  The love interest, which has changed since I first began writing, reflects the ideals painted for me in the entertainment I have always enjoyed.  He is rich, handsome and mysterious.  As I matured and changed, so did my characters and my story.  And when writing became a serious venture and not just an escape to a fantasy world, I added reality or plausibility, to make my characters really come alive.
With the desire to make my characters and story live, The War This Side of Heaven became highly detailed and grew into a trilogy; it will also be an ongoing series.  The After School Murders is the first book and should be released in September of 2012.
Sharon Evans © 8/1/2012, Used by permission. 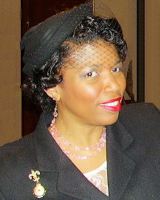