Last night I watched an episode of  ‘My Cat From Hell’ that was of particular interest to me. Teaching kids to treat their pets with respect.

The episode showed a family with two cats, one that was so laid back it didn’t seem to care what the kids did with it. It just flopped about in their arms and allowed them to tip it upside down and one kid ever tried to put it into the refrigerator. Basically, the child treated it like it was a stuffed toy. The other cat, understandably, was terrified of the kids, and scratched and spat whenever anyone reached out a hand toward it–or a foot as one of the children did, threatening to kick it.

My peeve is that some parents don’t seem to notice, as was the case with this family. I don’t imagine for one second that they would deliberately be unkind to animals. They’re just uninformed. The cats or dogs either submit to a life of hell, or rebel, and get sent to the shelter or euthanized because they are considered dangerous. 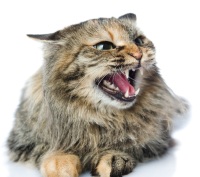 I commend the cat whisperer, Jackson, for his patience and consideration in this episode, in which he admitted he knew nothing about kids or how to get through to them, but he did, in fact, achieve this. He even took the time to visit the children’s school and teach their classmates how to treat animals–what to do and what not to do and how to pet them. By the end of the episode the problem cat had gone through a surprising transformation, and obviously realized the children were no longer going to hurt her.

Writers who do research on psychopaths will often include an episode in which their antagonist does something to hurt an animal, although it is not recommended that you go into any great detail. Readers find it easier to read about people being tortured than animals. Perhaps our empathy for animals comes from their innocence–and the same goes for children. No animal–or child–is born with a cruel and nasty temperament. If they become aggressive, it usually has something to do with the treatment they get from the humans around them.

If ever I visit a home in which children don’t seem to understand and have never been taught how to treat animals, I am quick to take them aside and explain to them that animals have feelings too. I hope you guys reading this will do the same.

(I am an incurable animals lover, and always try to include them in my stories. In the Redneck P.I. Series, Twila’s rescue dog, Scratch rides on the back of her Harley with her in a special metal basket fabricated by Twila’s Pops. In Aquarius Addiction, Arlette Xylander’s crazy black cat, Marbles seems to know what’s going on when the Voodoo queen performs a ceremony to find out what secrets the old mansion holds in its walls.)

I just received my cover for the next story in my Zodiac Series, Virgo’s Vice. As always, Soul Mate Publishing’s artists did an amazing job and captured the essence of the story, which is a romantic suspense thriller set in Africa.

Lexie King can’t believe she did this to herself — she signed up to work as a camera operator in Allan Dockery’s new survival type reality show.

She wanted to prove she could break her reliance on anti-anxiety meds, and make something of herself. But she had no way of knowing he would be there. The monster.

Now all she wants is to get away–as far away as possible. But how? They’re one stop past nowhere in Africa.

When shocking events start to happen, she draws comfort from Jake, the producer’s chocolate lab, and cowboy contestant Billy Murphy, who makes her laugh at the darkest of times, and heats up more than her heart with his touch…

Scheduled for release in October 2015.

I was on Facebook the other day when I got one of those postings pointing out that ‘dog’ spelled backwards is ‘god’. As always, I smiled and wondered where people come up with that kind of stuff, but it got me thinking. Most dog owners love their dogs, think of them as family members, and mourn them when they die. I did some research, found some interesting info, and decided to use it for my post on the Write Room Blog.

Sinbad, a dog of indeterminate breeding, signed his enlistment papers for the US Coast Guard with a paw print, and received his own identification number. He must be one of the most decorated dogs in history, having been awarded the American Defense Service Medal, American Campaign Medal, European-African-Middle Eastern Campaign Medal, Asiatic-Pacific Campaign Medal, World War II Victory Medal, and the Navy Occupation Service Medal.
Then there was Able Seaman Just Nuisance, a Great Dane who was the only dog to be enlisted in the British Royal Navy. He got into trouble for constantly boarding the trains to Cape Town from the naval base near the southern tip of Africa, without a ticket. Sailors were allowed to travel free, so he was enlisted to alleviate the problem. His name was given as ‘Just’, last name ‘Nuisance’, and his trade ‘bone crusher’, while his religious denomination was listed as ‘Scrounger.’ His statue can be seen in Simonstown, South Africa, and a movie about his life is currently in production.
On a final note, consider this. Simply stroking any pet can decrease levels of stress hormones, regulate breathing, and lower blood pressure, but dogs are the only ones that watch and wait every time we go out, and greet us with a happy dance and a wagging tail when we return. We are currently ‘between dogs’ in our household—not for long, I hope. It’s the first time in my life I haven’t had a dog, and I love our cats, but that special welcome is what I miss the most.
Originally posted on The Write Room Blog http://www.thewriteroomblog.com